skip to main | skip to sidebar

MWC DVDs and why they suck (a work in progress)

Married with Children being released on DVD made fans everywhere say, "about frigging time!" but will a severe lack of extras, replaced music and worse - a crime that should be punishable by death, surely - CUT episodes.

Here I'll do my best to explain what's up with the DVD releases in Australia, and perhaps some other countries' releases too. A work in progress as I go through all discs.

Yes, this came out in Aussie land before season 10 & 11 were out. But, they thought ahead and provided room to insert these discs in later.
This boxset was out in Germany previously (MWC is still fairly popular in Germany), and the 2 interviews were included. They're fine and fun to watch, especially Sagal's.

Season 1: Fine. No edits, music still in tact, including credits. Extras included 'hidden' Easter eggs contains leftover material from the MWC Reunion Special (2003). Another extra that could have been included is the original unaired Pilot, with the original kids.

Season 2: As above. No noticeable edits, credits & music remain the same. "Girls Just Wanna Have Fun" is not a DVD edit, but I'll expand on that later...
More bits excluded from the Reunion special as Easter Eggs. Extras that could have been included: The original airing of "Peggy Loves Al - Yeah Yeah Yeah" which included an audience vote and an extra scene. 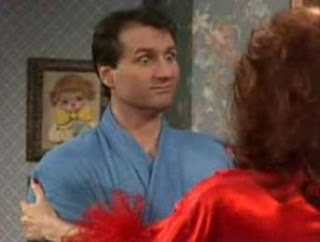 Season 3: Ahh. This is where the music replacement for the theme starts, and will remain until the end of the series. It's not Frank Sinatra's fault. It's to do with the publisher; there's an excellent explanation here: http://www.tvshowsondvd.com/news/Married-Children/3994
It was expensive to use the theme on first airings, let alone DVD releases. However, you can still hear the original theme on all episodes when shown on TV, all over the world.
OBTW, listen closely to the very start of the closing credits for "The Harder They Fall"and you can hear the very start of the original theme!

Season 4: Oh dear. All was going swimmingly (well, sort of - episodes sound very sped up causing everyone to sound like they're on helium) until "At the Zoo" and I noticed a little bit cut out. Then a little bit more. THIS BLOWS CHUNKS! These are not cuts due to "offensive" material, but for time, a la syndicated episodes. Not happy.

Then there is the issue of "It's A Bundyful Life", but that, like "Girls Just Wanna Have Fun", is for a future update.

Season 7: No noticeable edits, but "Chicago Wine Party" and has the L&M text in the end credits!
Posted by BundyAnna at 5:38 AM

BundyAnna
"I grew up watching TV and I turned out TV." A former dancer and current drama student who watches a lot of television.